skip to main | skip to sidebar

The End of the Road in Rio 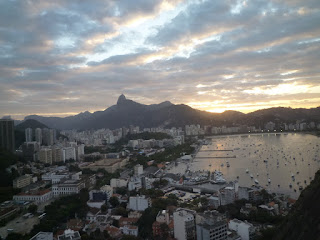 Sunset on the beautiful city of Rio from the Pão de Açùcar
Here it is: Rio de Janeiro is the end of the road for my trip, exactly 3 months after my arrival in Buenos Aires. Many thanks to all of you for following my little adventure. I hope to see you soon to share stories and pictures from this amazing trip! 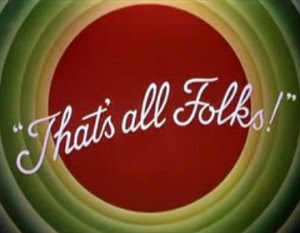 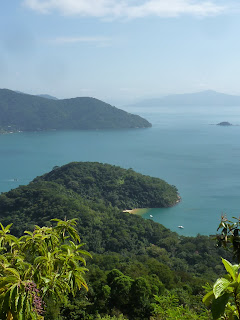 A view of Ilha Grande on the way to Lopes Mendes beach
La Costa Verde is the wonderful stretch of Brazilian coast south of Rio de Janeiro, where white sand beaches meet the jungle. I only spent one night in Rio before I could resist the temptation of spending some time in Ilha Grande - and listened to my brother's advice to "go and relax on the beach, drinking Coco Gelados and Caïpirinhas". 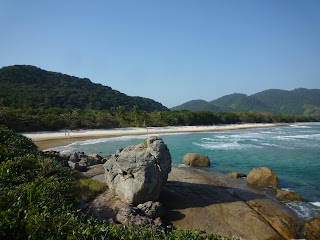 Prahia Lopes Mendes, a surf spot and one of the best beaches in Brazil
I cannot write a whole lot about my activities on the island because they mostly consisted of just that: relaxing on the beach, drinking Coco Gelados AND Caïpirinhas. The island is a paradise for relaxation because there are no cars, no ATMs, little human activity (there are only a couple of villages around the island) and the only sounds here are those of the waves and those of the animals living in the jungle (a great combination, they should make recordings of it and sell it as meditation CDs - well actually I'm pretty sure it already exists.) 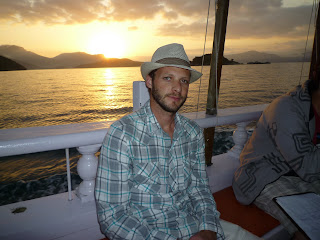 Sunset on Ilha Grande on the way back to Rio

Unfortunately the end of my trip approaches and I could only stay 3 days on the island in order to be able to visit Rio de Janeiro, even quickly. I recommend Brazil to all beach lovers, because in addition to have beautiful landscapes (and people), the country also has the nicest people on Earth: Brasileiros and Brasileiras are always smiling, friendly and very helpful. This creates the perfect environment for a great, lazy-type of vacations... Oh, and did I mention this is technically winter yet it is still 28 degrees Celcius? 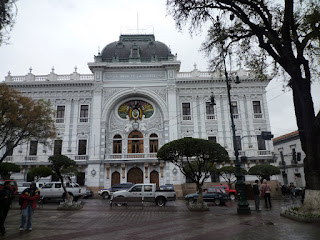 I spent the last weekend in Sucre, Bolivia's official (i.e. constitutional) capital, and a charming colonial town that used to be the capital of the Virreinato del Perú under Spanish rule, a large area including parts of current Perú, Argentina, Chile and most of current Bolivia and Paraguay (the city was then called La Plata).
The architecture is reminiscent of southern Spain: it even bears the nickname of "white city" due to the color of most buildings in the colonial center. 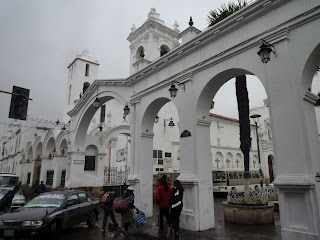 It is a very pleasant city to visit, and there are many bohemian-style cafes and restaurants. The climate is also more temperate than in alto Bolivia due to its relatively low elevation (2700 m). Note: it was actually pretty cold and it rained last weekend, but at least it didn't snow like in La Paz!
Now I am back in La Paz for my last two days in Bolivia before flying to Rio de Janeiro. I'm sad to leave Bolivia, such an incredible country, but to be honest I can't wait to hit the beaches!
Posted by мΛж at 15:51 3 comments: 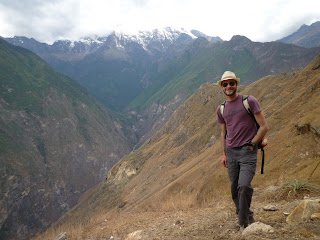 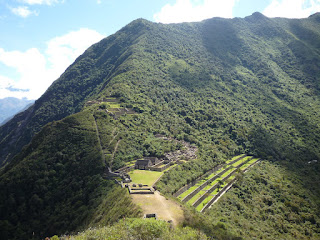 Choquequirao: a completely unobstructed picture of the site
I'm back from my trek in Peru and it was fantastic. I spent 5 days walking 64 kms, going through incredible landscapes, including a double-crossing of the Apurimac canyon to reach the Inca site of Choquequirao (1600 m of vertical drop going down, then up, then down and up again on the way back). This is the only way to reach the site if you are not Alan Garcia Perez - the Peruvian president - who comes regularly using a chopper, and as a result, there are very few visitors there, which makes the visit an incredible experience. During the 2 days our group of 4 visited the site, we met only a couple of frenchies and a small group of Peruvians studying to become guides. This contrasts with the 2000 to 3000 persons a day visiting Machu Picchu! This was incredible to spend hours walking through the site with no other people present. The site itself is currently smaller than Machu Picchu although archeologists believe they were approximately the same size before vegetation took over in Choquequirao. There is a team of 40 archeologists working on the site presently, trying to find and restore the 60% that are believed to be covered by the jungle. Their latest discovery, in 2004, was the Llama terrasses, a series of terrasses used for agriculture and decorated with Llamas.

It may seem like a crazy idea to build a city in a place so remote, at 3100 m of altitude, and I think it is. But the Quechuas (the real name of the people from this civilization - Inca was the name of the king) did not mind the altitude, the effort to get there, and these sites (Machu Picchu included) were believed to be both religious centers (and they had to be as close as the sun, Inti, the true God, as they could) and military centers that established dominance over the region, a little like castles that can be found all over Europe. 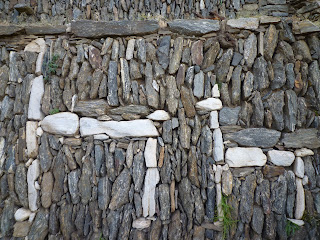 The Llama terrasses in Choquequirao, discovered in 2004

Even if this experience was everything I needed, I still had to visit Machu Picchu, a wonder of the world and a must-do in South America. I am a little torn because the site is well preserved (all of the city is uncovered and visible) and it is incredibly beautiful, but access to the site is so easy (trains and buses bring an incessant flow of tourists every hour, all day-long) that it has become a very crowded place - archeologists consider that the number of visitors should be limited to no more than 500 per day to limit the slow destruction of the site that has already begun. In sum, I had two very different experiences visiting two beautiful sites, and I would not change a thing if I had to do it again.

Now I am back to Bolivia for a while before finishing my trip in Brazil. Three months are definitely not enough to visit this incredible continent, so I will have to keep making choices... 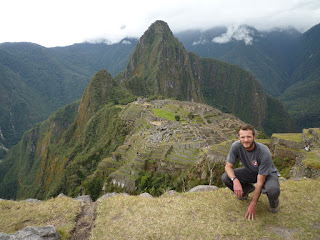 On the Incas' tracks 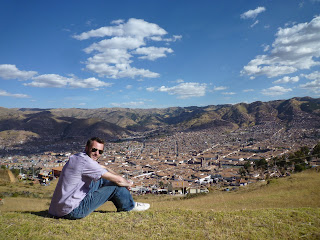 Overlooking the beautiful city of Cusco 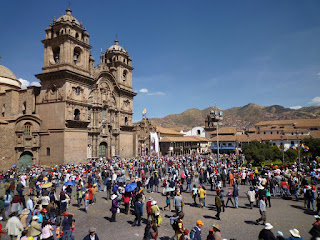 Gathering for festivities on la Plaza de Armas
I spent my last two days in Cusco, Peru, which was basically a giant party-city (hum, I mean, more than usual!). Indeed, Cusquenos were celebrating Inti Raymi, a big festival in tribute of the sun that happens every year at the turn of winter (June 24 is the date of the official celebration, of course a local holiday). It is a big carnival were people parade and dance in the streets in traditional costumes and reenact Inca ceremonials. It was mostly unplanned on my part to get here at this date, but it surely was a lot of fun. Now I am off to trek through the jungle to Choquequirao, a sister Inca city to Machu Picchu, for the next five days, then finish with the visit of the world-famous - but much visited - wonder of the world on the sixth day. This should be special, according to the locals, so wait for the report... 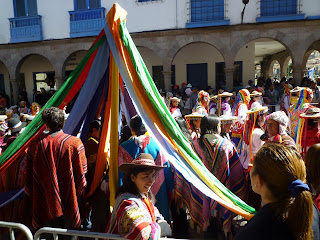 Cusquenos parading on the street for the Inti Raymi festival
Posted by мΛж at 06:04 No comments: 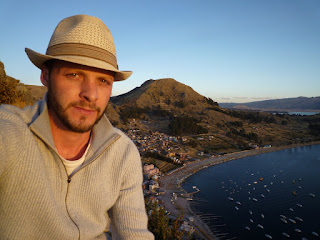 Overlooking the bay of Copacabana
Copacabana is a quiet Bolivian village on the shore of Lago Titicaca, at the border of Peru. Today, not much happens here, and it is a great place to relax and enjoy the sun and magnificent landscape with the Andinian peaks plunging into the frigid lake at an altitude of 3800 m. However, this region, and in particular the nearby Isla del Sol, is believed to be the birthplace of the Inca religion and civilization. 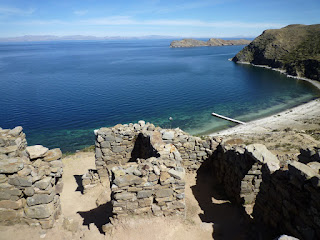 The Isla del Sol is a relatively small island that can be crossed in one day - it is a 3-hour pleasant walk from North to South - and that bears a striking resemblance to the Greek islands, if it were not from its pre-Inca and Inca ruins of temples, villages (where houses were connected by what looks like a maze of pathes) and other energy-charged sacred rocks. The weather was beautiful and it was a perfect way to spend my birthday. I hope to do more celebration this weekend in Arequipa, Peru.

I am back from a trip to the jungle near Rurrenabaque, in the north of La Paz. The contrast is stunning between the two cities: in a 35-minute plane ride the altitude drops 3700m, and the temperature goes up 15 degrees C. After 3 hours of jeep, we reached the Yacuma river, where we "lived" for 3 days. The animal and vegetal life is unique and we can almost touch the hundreds of caymans, yellow monkeys and amazonian kingfishers. A few of my impressions just after the trip: hunting the anaconda is the dirtiest job in the jungle (feet in the swamp), piranha fishing requires a lot of patience (they know how to eat the chicken around the hook), and swimming in muddy water a few meters from the caymans is fun but not very comfortable. 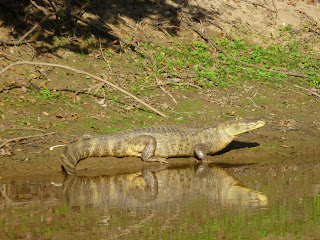 A Cayman on the Yacuma River 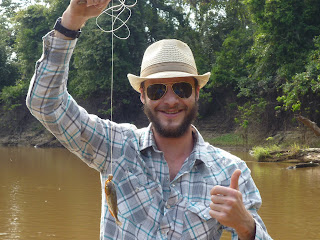 Catch of the Day: Piranha

Older Posts Home
Subscribe to: Posts (Atom)
The sky's the limit
on this chartered trip away

мΛж
He was a self-made man who owed his lack of success to nobody.